Heyo! I recently hit something of a milestone so I figured it was a good time for another Arbiter update! This will be a shorter update focusing on Ashe’s redesign and my plans/schedule for this year.

I spent the past couple months working on a full redesign for Ashe. For those that don’t know, Ashe is Arbiter’s main character and while I’ve received a lot of incredible concept art this past year for other characters, I felt that Ashe wasn’t quite up to their standards. I also just have a better idea of the game’s story and Ashe’s overall character now, and I didn’t feel that his old design fit him anymore. Lastly, with the cutscenes I intend to have I needed much more control over his facial animations and overall level of self expression. With that, I remade him: 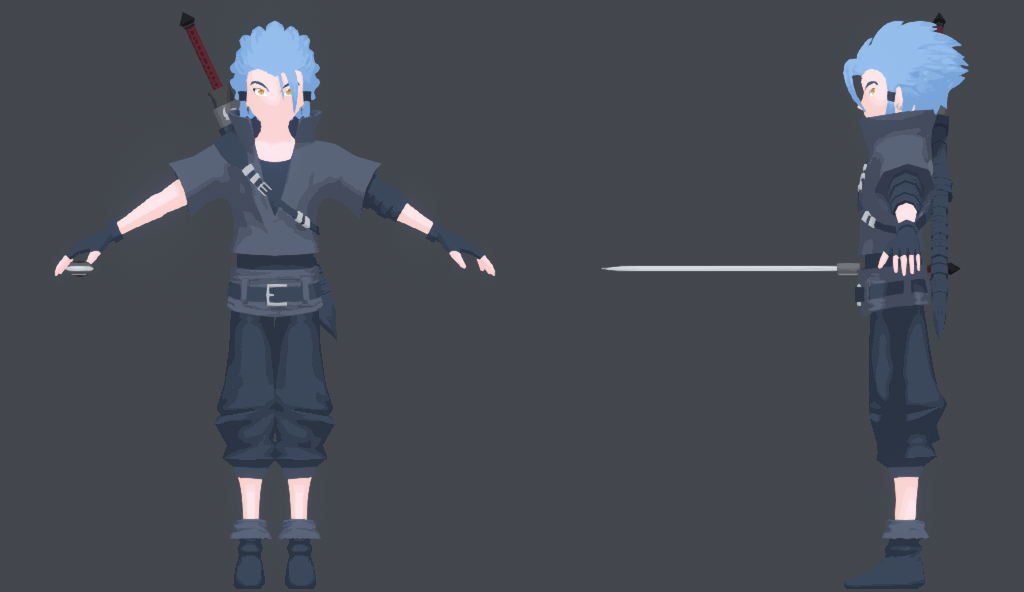 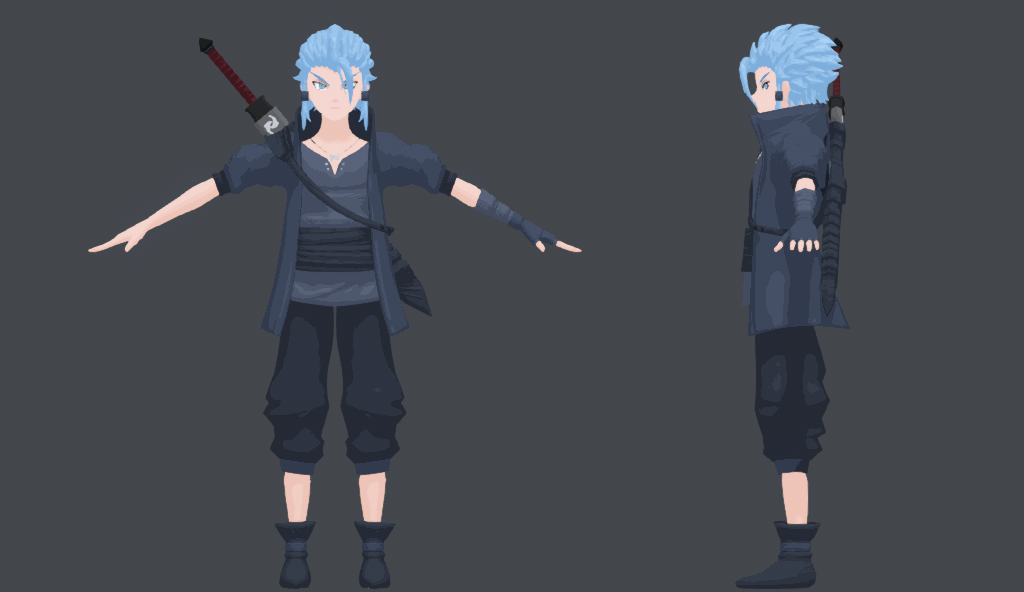 In general, I wanted Ashe to look older, more expressive, slightly arrogant, and more comfortable than he was before. Of course, I also wanted to just increase the overall fidelity of his model by adding more detail to the shaded areas and whatnot. I gave him a coat for that SSS Style ranking, and detached it from his body so I can do all sorts of fun stuff between varying it up with transformations and… taking it off (seriously at this point I’m going to have every male character take their coat/shirt off but I just can’t help myself).

For the facial animation, I decided to go with morph targets (blend shapes) as I have a lot of faces to animate and they’re by far the easiest to set up. I tried to find a nice balance between as few blend states as possible and enough to keep his face nice and expressive. My main sources of inspiration were anime faces and trying to make sure I could recreate as many as possible.

It’s not perfect, but it’s more than enough to get the job done! I plan to have some pretty intense/emotional moments throughout the game so getting at least to this level was very important to me. The other benefit of morph targets is that all of their animations will transfer easily between characters, so all I have to do is recreate the expressions for each character and they’ll be hooked up to my face rig without a hitch. For reference, here’s my (partial) morph list and control rig:

Much shorter update, but I also spent a week or so writing out the entire game’s plot. It came out to about ~30,000 words total, dialogue included, so I’ve got a pretty solid outline/script for the story now. It’s also helped put a lot of stuff in perspective like how much I can expect to pay for voice acting, which cutscenes I want to animate, etc. etc. All in all, it was done more for my peace of mind than anything else, but I can say with confidence now that Arbiter’s story should be a fun ride, so I hope you all enjoy it when the time comes!

I also spent a few weeks replaying all the Kingdom Hearts games… you know, for studying purposes.

The goals for 2019 are to pretty much be gameplay ready by the end of the year. With Ashe’s redesign finished, I’m going to be redoing a lot of his old animations and a whole slew of new ones. Then I’m going to throw them all in-game and get every combat mechanic finished so that we can get the game to its revised vision. From there I’ll be finishing up the models/animations for the remaining enemies (excluding bosses), and getting all of them in-game too. Once the bulk of that is done, I’ll be moving over to Combat Demo.

I’ll be creating another demo once I’ve got all of the combat systems and abilities finished, as well as having a few fully featured enemies in-game. This will have a very quick mock-up level created solely to test combat, and will likely not have much in terms of audio/voice over (if any). The goal is entirely to test and get feedback on combat. I don’t expect it to be ready until around mid-year, but I’ll keep you all posted when the time comes. It’ll be publicly available for everyone to try, though Kickstarter Collaboraters and Beta Testers will get to try it first, as well as… Patrons? 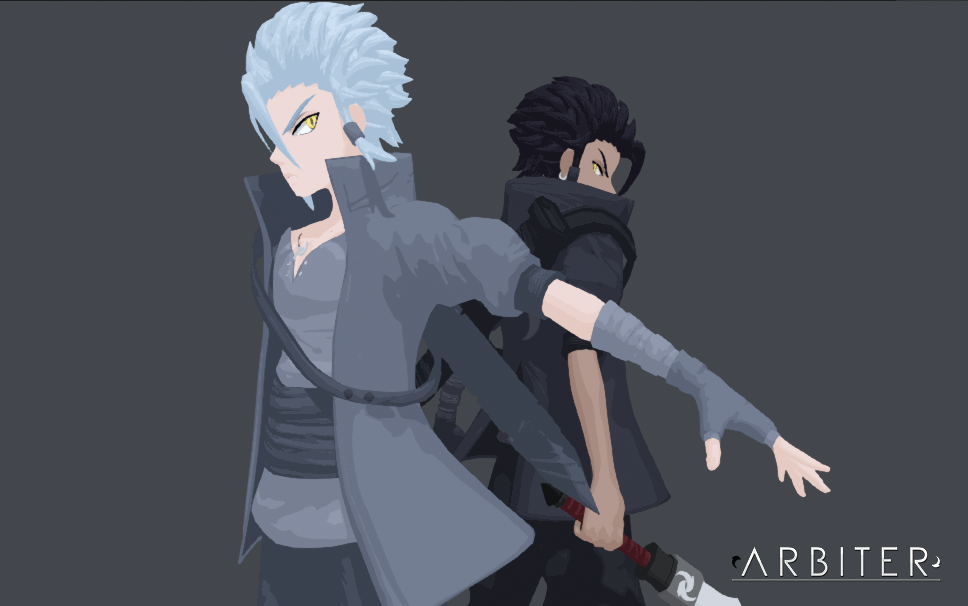 In writing Arby’s script, I got a much better idea of the time it will take me to finish the game. Long story short, it’ll be a while (a couple of years at least). The Kickstarter was always intended to pay for things like concept artists, voice over, and audio engineers, and to that end those funds are healthily serving their purpose. They were not, however, intended to support me personally. That’s what the Patreon will  be for.

I’ve had several people reach out asking how they can financially support the game, and I haven’t really had an option for them. Patreon will allow anybody who’s interested to support Arby’s development (keeping me fed) while earning them a few benefits themselves (which I’m still working out). It’ll essentially work as a tip jar with rewards tied to things like getting your name in the credits, Discord roles, voting in backer-only polls, and early access to any demos.

I’ve talked to the Kickstarter Backers to make sure they’re okay with the idea of additional funding and everyone has been nothing but supportive. I’m still working out the kinks (deciding on rewards, getting graphics done, etc.) but I expect to make that page available alongside the Combat Demo, with early access for Patrons and Backers. I didn’t want to ask for money until I had something to show for it, so the Combat Demo will also serve to kind of justify the Patreon’s existence. You can expect both of those later this year, so hopefully they’re worth the wait! 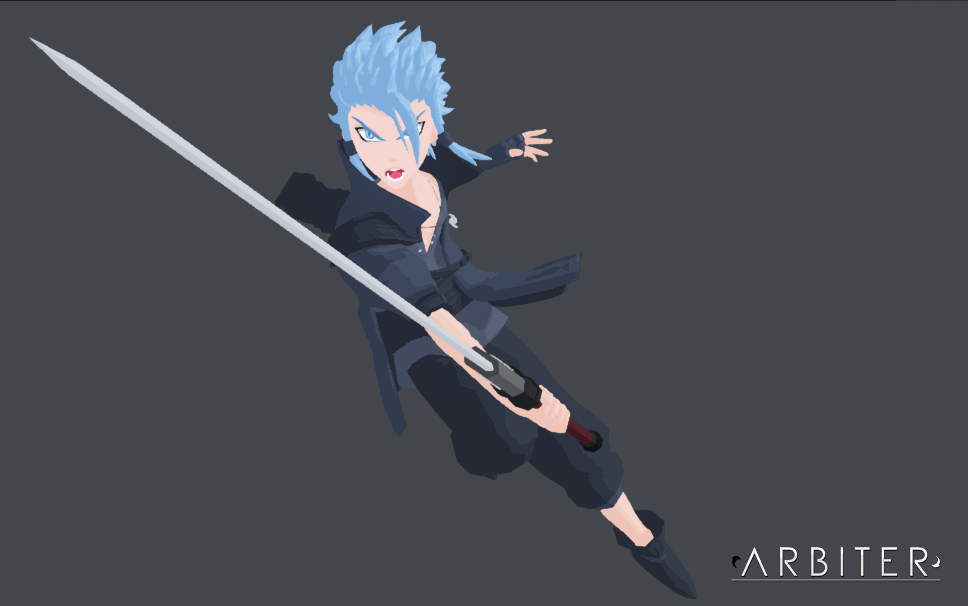 Anyways, that wraps up this update! The upcoming Combat Demo will be a huge milestone for Arbiter, so I hope you all look forward to it. I’m particularly excited to start getting Ashe and the enemies in-game (and studying some DMC5 while I do so). I know there haven’t been a lot of gameplay updates as of late, so this year should start to fix that. Thanks for being patient with me everyone! I’ll do my best to make it worthwhile.