Hey everyone! Real short update this time around, but I’m planning to devote the rest of the year to implementing/iterating/revising pretty much all gameplay systems into the game, so I wanted to quickly recap the past couple months before you never hear from me again!

tl;dr I spent all of March finishing pretty much all of Ashe’s gameplay animations. I’m sure some more will pop up here and there over time, but at around ~200 total the vast majority of them are finished. Movement, combos, abilities—Ashe’s new model (or Newshe, as we call him in the Discord), is ready for implementation.

I spent all of April modeling and rigging the remaining enemies for the game! I still have to animate a bunch of them, but for the most part they’re all ready to go art-wise. The total enemy count comes out to about 26, so I should have more than enough variety to work with for the whole game, and I’ll be moving onto mini-bosses and bosses sometime next year.

While the first batch of enemies were largely my designs, this batch is more or less all commissioned work and backer concepts. I still ended up modeling/animating them myself, but their incredible designs come from a few super skilled artists who’ve been nothing but a pleasure to work with.

I’m gonna break them all down just so credit’s given where it’s due! 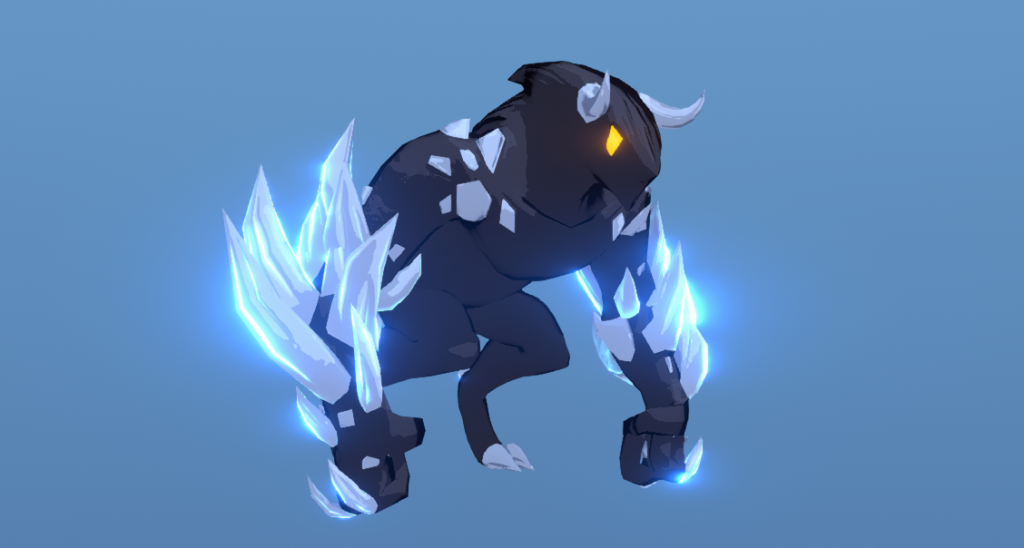 The Bulwark: By Grey (@seeyouguyslater)

This is a remake of an old enemy I asked my friend Grey to redesign. I felt the original design was a little lackluster as I wanted this to be a much larger and intimidating enemy compared to the others, and I think Grey succeeded at that pretty dang well!

They attack with powerful energy-infused punches, and can also shoot spikes from a distance. They defend themselves with their shield-like protrusions, which can be broken by attacks of the opposite type. Once broken however, they’re completely defenseless, but still quite powerful! 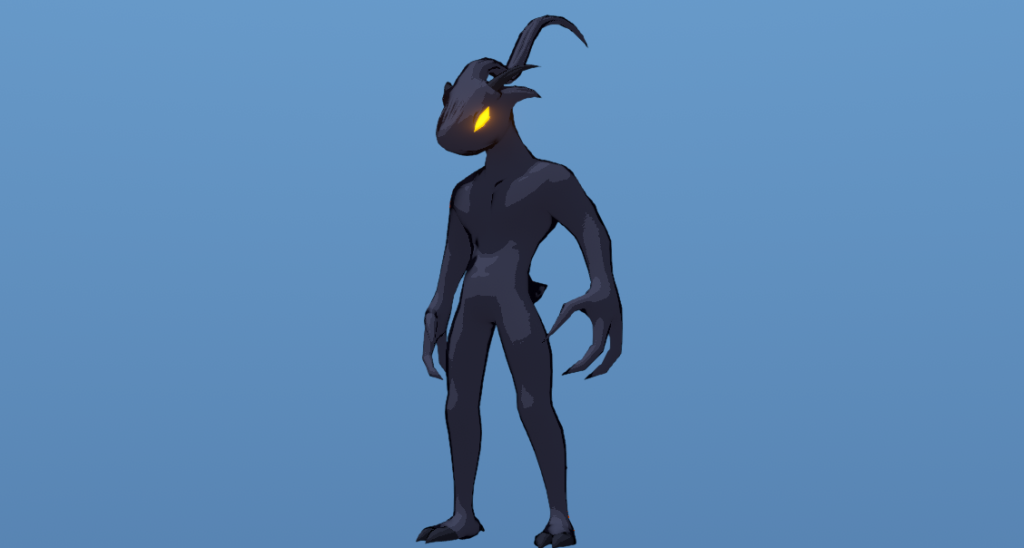 The Fiend: By Grey (@seeyouguyslater)

This is a common enemy also designed by my friend Grey! I basically asked her for a super simple enemy that would be fit for attacking in hordes, kind of like the Neoshadows from Kingdom Hearts. It took us a few iterations but eventually we got this!

They’ll fight aggressively in groups, primarily using electric attacks. You can kind of consider them the mid-form of this common enemy and this higher tier enemy. 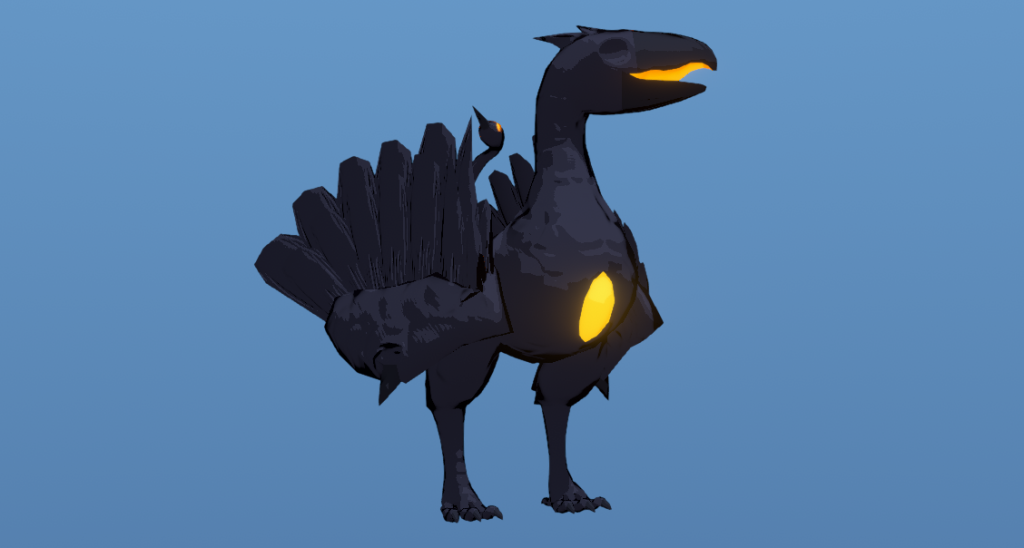 The Ostra: By Grey (@seeyouguyslater)

This is the first backer enemy I made—it’s temporary name was “Dark Chocobo”. The original concept for these guys was provided by the backer, Angel, and Grey revised the design to fit more in line with the game’s style.

Their blank eye sockets and sinister grin definitely make them something of a creepier enemy. They fight by weaving in and out of melee range and snapping with their beak(s), and can also sing to stun Ashe whenever they need to defend themselves. 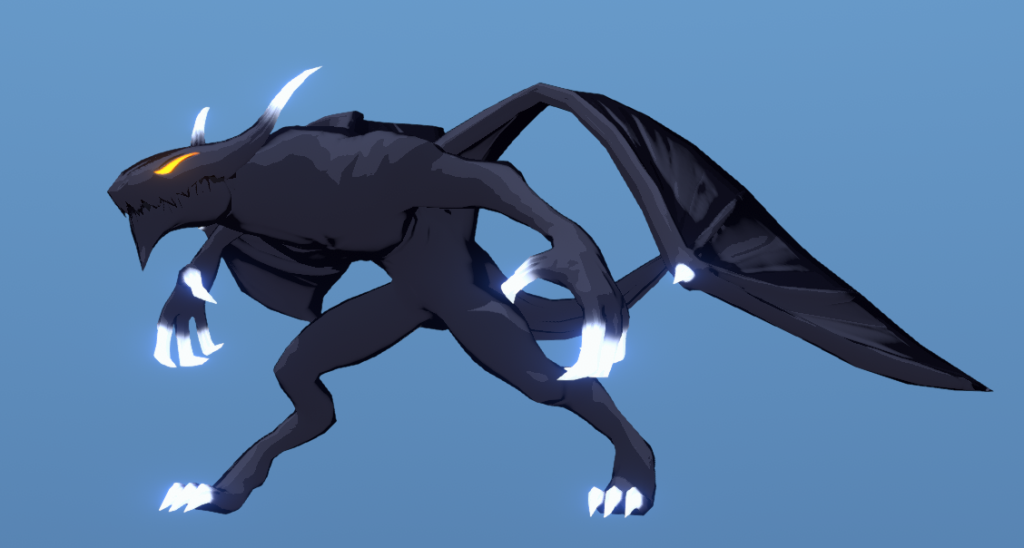 The Draconid: By Grey (@seeyouguyslater)

This is the second backer enemy, with the original concept provided by Zexion (a fellow KH fan, I see), also revised by Grey.

The idea for these guys was essentially a dragon-like humanoid enemy that swoops in from above to ambush Ashe & Co. They’ll also fire a large, powerful blast of energy from a distance and attack with their claws at a close range. These guys are a bit trickier, however, as the type of their attacks will vary based on what they’re doing, so stay on your guard! 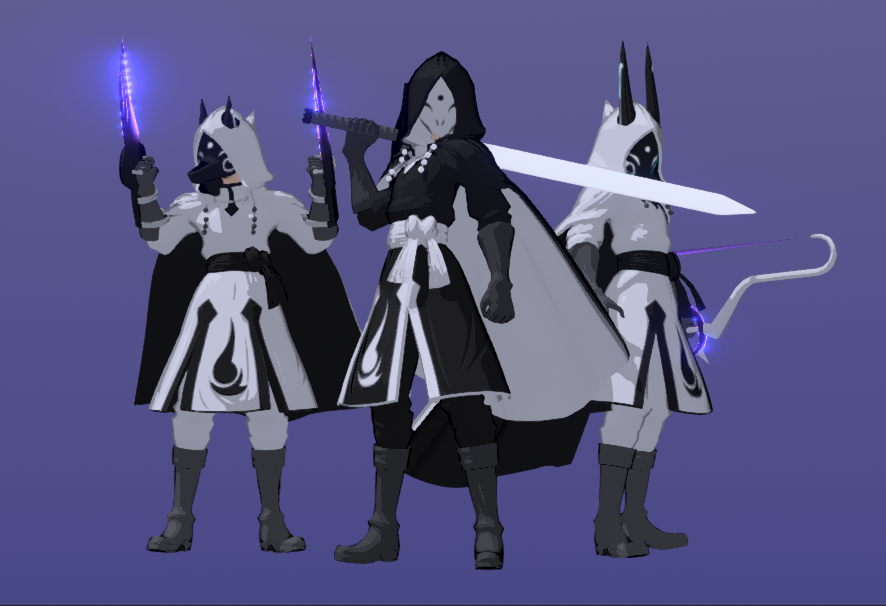 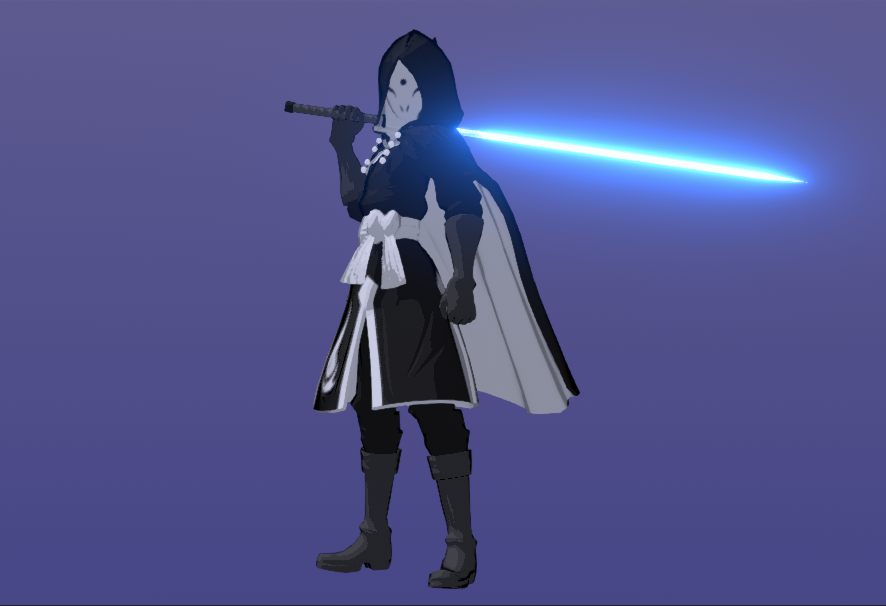 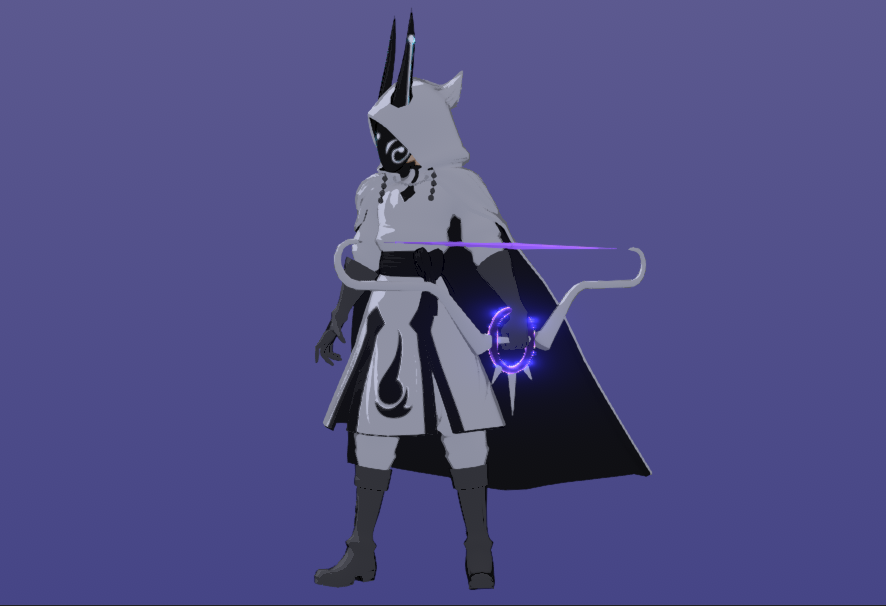 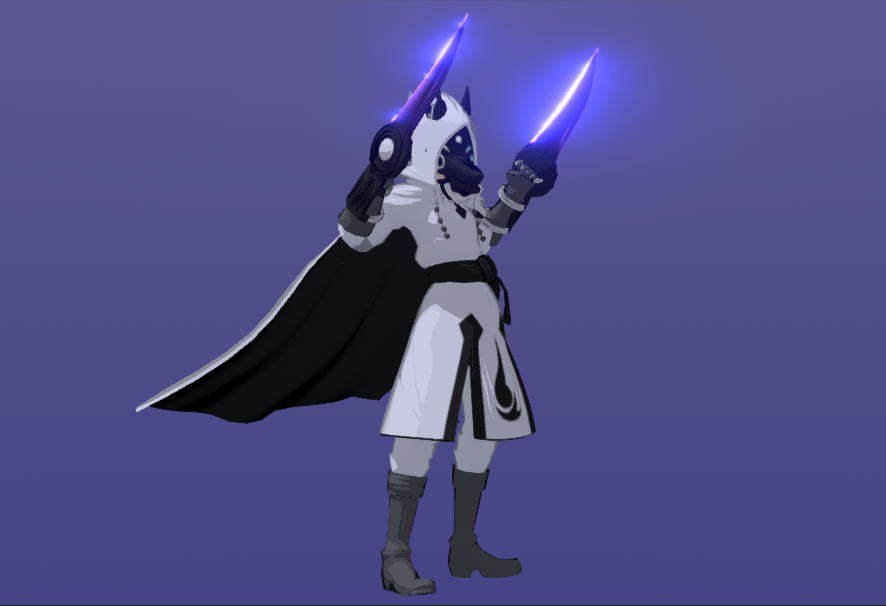 The Spiritualists: By Ariel (@gravitydust)

These bad boys represent the only human enemies in the game outside of bosses and mini-bosses. They are cult of fanatics that worship a spirit known as the “Ethereal Queen“, but unlike normal humans who stay as far from spirits as they can, the Spiritualists embrace them and corrupt their own bodies with energy to better serve their master. Ashe will encounter them while hunting their queen, but they will not allow him to seal her so easily.

They fight using a sword, bow, or fist weapons and attack in large groups that ambush and swarm around Ashe when he enters their territory. Since they’re still human, they’re much more intelligent than your average enemy, doing many of the things Ashe can do only in larger numbers. Additionally, they cannot be sealed, meaning Ashe will have to knock them out or worst case, kill them.

Ariel’s done a ton of fantastic design work for Arbiter, and the Spiritualists are no exception. She made several variants for their outfits, masks, and weapons, and also designed their leader and the Ethereal Queen herself. She’s done a whole bunch of other designs for the game too, including some of the main cast, so look forward to seeing them in the future!

The Nymph: By Puni (@punipaws)

These are somewhat passive spirits that will heal other spirits during encounters. Their long tree-like hair roots them to the ground, keeping them in place no matter what (though they can still be somewhat knocked back and launched relative to their position).

These spirits are very different in that they aren’t made of Ethereal/Umbral Energy, but rather Life Energy. Mechanically speaking, Life Energy is essentially neutral, meaning that one type or the other won’t have any advantages or disadvantages. Upon being sealed they’ll release a surplus of this energy, healing Ashe in the process.

Puni has made several designs for the game, including two mini-bosses and a certain quirky character. They’ve done an incredible job of making very unique designs that still fit within the game’s world/style, and I can’t wait to show you the rest of them!

The Proxi: By MANGO (@mgosketches)

These little bastards are explosive hazards that will destroy themselves (and Ashe) in an explosion of energy when they get too close. They’ll attack in mobs, but they’re quite easy to take down and won’t explode should Ashe seal them. However, should they detonate too close to one another, a chain reaction may occur…

MANGO’s done several designs for Arbiter, including the game’s first poster back in RTX 2017. She’s been a lovely friend and has another really awesome design for some human characters that I’ll be making soon!

That wraps up this update! I’m still planning to do an updated combat/gameplay demo this year, though I’m still deciding how much content I want it to have (which will likely determine when it releases). At the very least, expect to see a lot more gameplay GIFs and videos on both my Twitter and the Arbiter Discord as I progress!

My main goal for this year is to be gameplay ready, which I define by having all of Ashe’s mechanics, abilities, and systems—as well as all non-boss enemies—in-game. Once I’m there, I’ll be switching over to level blockouts and modeling/rigging/animating all the human characters. I’ve been working with a lot of incredibly skilled artists on the human characters to make some really kick ass designs, so I can’t wait to finally get around to them. In the meantime however, the next blog will be all about gameplay, so look forward to it!